Last June I attended a Primate Evening at Colchester Zoo and won an auction for a private primate enrichment session with the animal trainer.  After almost a year of not pinning down a date Joel and I finally made it to the zoo last Sunday.
We were met at the zoo by Jez the animal trainer [of Zoo Days fame!] and he took us to our workshop.  We were faced with a multitude of materials with which to try and engage the primates and give them something stimulating to do within their enclosures.  In the wild animals would be hunting for food and rather than the keepers just giving them food in the zoo they like to get the animals to work for it.
The materials we were faced with included:  fruit, string, sellotape, rope, cardboard boxes, yogurt drink bottles, hay, leaves, twigs, hessian sacks, paper cups, old clothes, perfume, cocoa powder, old fire hose, bamboo sticks and my favourite.... meal worms! 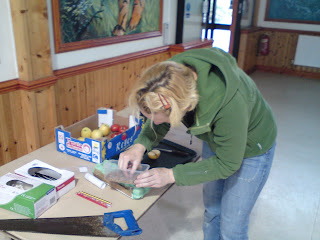 We had just under an hour to assemble a variety of 'toys' for four different types of primate:  Orangutans, Buffy-Headed Capuchins, Squirrel Monkeys and Red-Ruffed Lemurs.  Our toys included:
Orangutans - Rajang and Tiga
These huge guys received three toys and we went into their enclosure to tie them up.  As we went through the cages at the back we were face to face with Rajang, a 41-year old orangutan.  Without the glass there, and just behind bars he was enormous.  Once we had placed the toys in the best locations we retreated and both organutans were permitted access to the main enclosure.  Rajang had a good sniff around where we had been and seemed interested in some of the toys.  To Jez's delight Raj climbed up to reach some of the toys which is very unusual because apparently he is pretty lazy.  He carefully took apart the box enclosed in the scented vest and received the reward of tomato and apple. 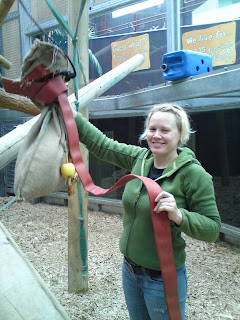 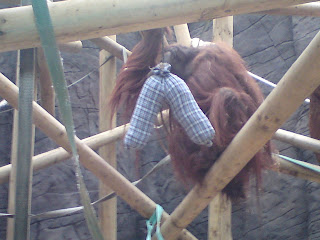 As he was playing with the stuffed pyjama bottoms [with a hint of cocoa powder] Tiga came in from the outdoor enclosure draped in an E.T. style cloak.  He quickly disrobed and made his way round all the toys where he climbed right up to the top and undid the knots on the highest toy.  He then dragged it back to the ground and undid more knots in the rope and fire hose and reaped the rewards.  Then he checked out the already empty vest box, then proceeded to Raj's toy.  Raj was having none of it and there was a bit of a squabble.  Tiga outsmarted him however by climbing up and undoing the top knot and yanking it away from Raj.  Poor Rajang was left with nothing as he chased Tiga and the treats outside.  It is always fascinating to watch these animals when visiting the zoo but it was even more amazing to see them working on toys that you have created yourself.
Buffy-Headed Capuchins
Next up was a family of buffy-headed capuchins.  We passed by them in their cage as we headed to their enclosure.  Here we hung the box in a box in a bag for them.  We made our way back out to the window and the keeper let them in to the enclosure.  They sensed immediately that there was something worthwhile in the sack and took turns to try ripping it open.  Given that Jez and Joel and really had to squeeze the boxes into the sack it was stuck pretty fast.  Eventually the monkeys just tore away at the cardboard and sent it flying along with the hay stuffing.  They were right inside the sack clawing away at it, ultimately just leaving a big mess for the keepers to clear up! 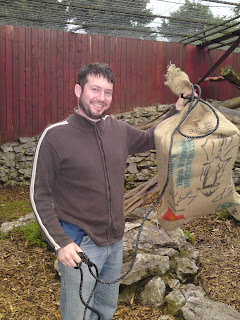 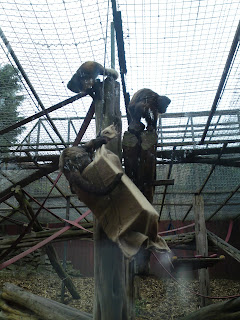 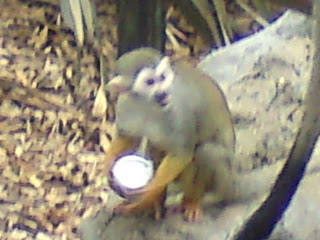 There were about 30-odd tiny squirrel monkeys in this enclosure and we were not able to go in because they can give a bit of a bite.  So, the keeper took our toys in and hung them up.  She barely got a chance - the monkeys were all over her trying to grab at the toys.  Although these nimble guys managed to get at everything they didn't seem to realise that if they just pulled the hay out of the yoghurt bottles they would get a snack - instead they chose to try and chew through the plastic!  The bottles were turned over many times by monkeys almost rugby tackling each other and running off with the 'ball'.  It was fun to watch.
Red-Ruffed Lemurs
Finally, the one I had been looking forward to the most.  I didn't want to get my hopes up too much but I had a feeling we would be able to get into the enclosure with these guys.  I was right!  We arrived and tied the fruit kebabs onto the hammock suspended from their climbing frame.  They worked hard to get the bits of fruit from the scewers.  They were immensely cute and we even got to tickle one.  He was called Jess and enjoyed a bit of a tickle under the arm!  He even stretched out his arm so that you could get better access. 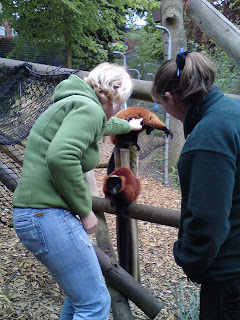 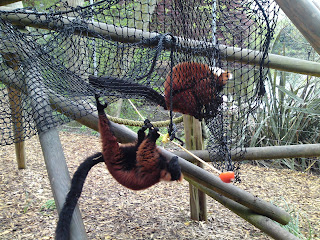 And that was the end of the enrichment session.  We spent the rest of the day wandering around the zoo watching the meerkats being fed, a bird of prey demonstration and we saw the new baby pygmy hippo - Ayo.
The auction money went towards some of Colchester Zoo's conservation programmes.  I will continue to use my newly acquired enrichments skills on my hamsters - make 'em work for peanuts!
Posted by Nic at 12:47 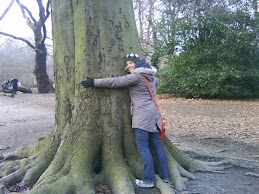